Over at io9, they put out a call for a Dreadnoughtus* photoshop competition, which produced some hilarious results. There is everything from Death Star Dreadnoughtus to the animal being Teddy Roosevelt's steed. It's totally hilarious and worth your time to check it out.

I thought of something that I felt was just too perfect, so decided to contribute, and sat down to bang something out real quick. I thought I'd share it here as well for my 3 adoring fans (click to enlarge): 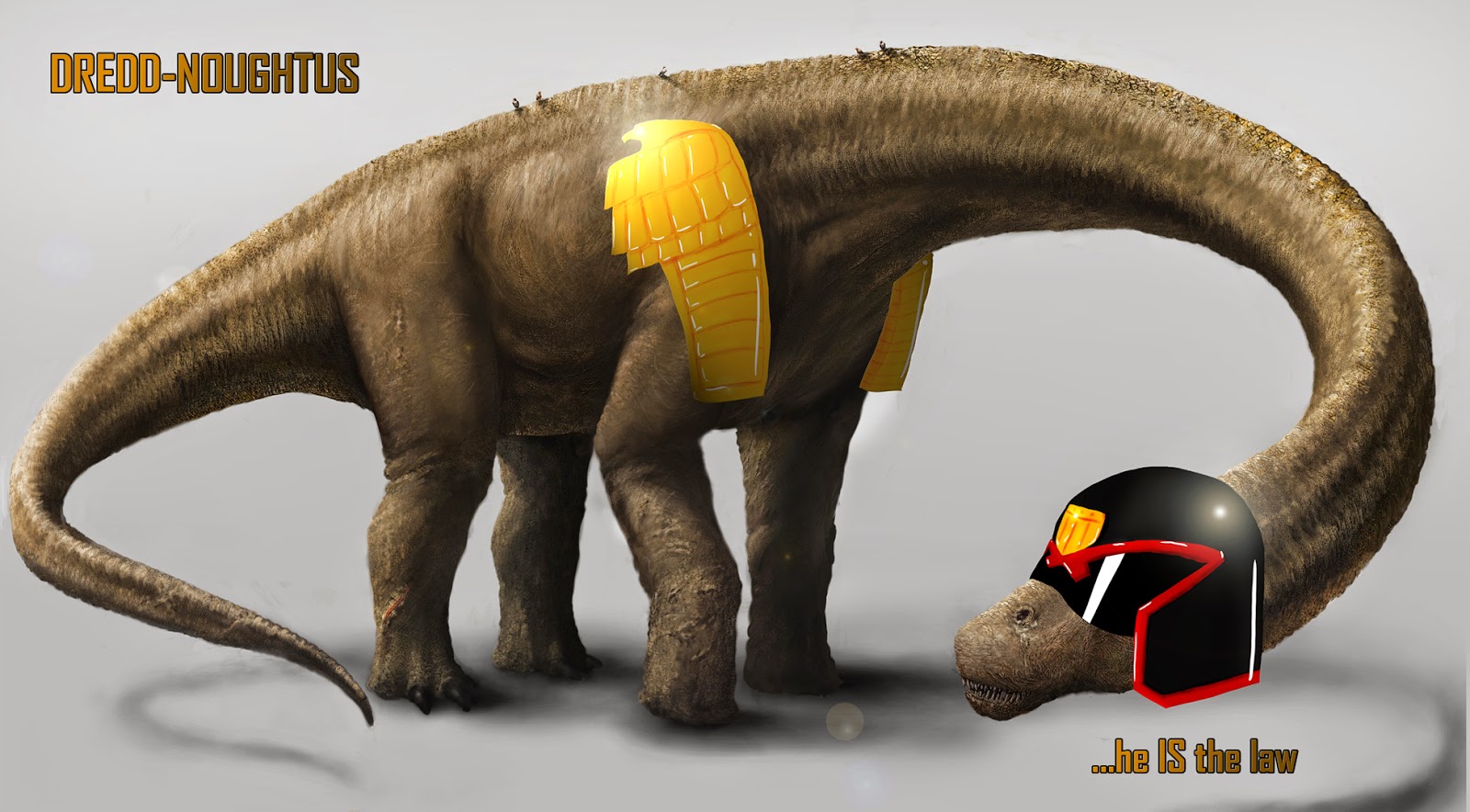 I mean, c'mon, how did nobody else think of this? NOBODY would want to mess with him. It felt too perfect.

I built another specimen mount today, and thought I'd share some pictures. I got slightly more ambitious and decided to create a rig to mount the mandibles in an open position, which made it a bit more complicated. Even so, it's still a pretty simple mount. All it requires is the wooden base, some  wire, wire cutters, and an adhesive. I decided to try out some model-making cement, which is supposed to work well for wood and metal. Seems to be holding up.

The underlying structure with the mandibles mounted.

...and with the skull mounted.

Before anyone freaks out on me, no the skull isn't real, and I'm respecting the Migratory Bird Treaty Act. It's a cast which I got from The Bone Room. Being the huge fan of raptors that I am, I felt in necessary to have one represented in my collection. And a cast is fine by me.

Last Thursday was a REALLY BIG day (pun intended). If you care at all about dinosaurs, you would know that it was the day that Dr. Ken Lacovara and the rest of the Drexel University paleo-team finally introduced the world to Dreadnoughtus schrani! This super-massive Titanosaur was discovered in 2005 in the Santa Cruz Province of Argentina, and it took just about ten years to finally get out into the world. The reason for this, is because of how much material was found. Unlike most large Titanosaurs, Dreadnoughtus is about 70% complete (opposed to the typical 2-20%), so this big guy will be a staple for anyone interested in studying the biggest of sauropods, or just the limits of size in terrestrial vertebrates in general. So it was quite an adventure to get the thing out of the ground, to Philadelphia, prepared, and studied. 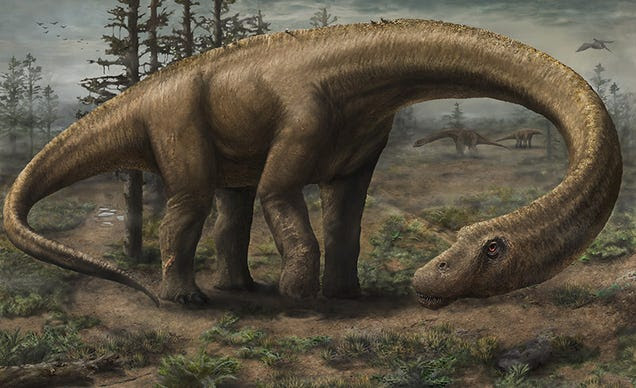 The completeness is a pretty big friggin deal, because it allowed the team to more reliably estimate the mass to 65 tons (more than a herd of Elephants, a gaggle of T. rex, or a Boeing 737-900), and estimated to have been somewhere around 85 ft long. Yeah, that's pretty big. But here's the kicker - the fossil bones showed signs that the animal was still growing! Awesome. Also, the paper is open access, so you should totally go check it out.


Ok, now that I've gotten you all acquainted with ol' 'Dread,' you may be wondering why I'm writing about him on this blog? I've never regurgitated a press release of a newly announced dinosaur before. Well, two reasons. First off, this animal holds a special place in my heart. For about two years during grad school at Drexel, I was introduced to this giant in the Paleo Lab at the Academy of Natural Sciences of Drexel University. I helped open the first big field jacket (the femur, which is about as tall as me, by the way), and spent countless hours (along with many others in the army of volunteers) cleaning and repairing many parts of the skeleton; getting it ready for study.

I was first sent to volunteer there since I was starting my master's thesis project, and needed to be better acquainted with the whole science of paleontology. After many months of learning from the best, I was then brought into the newly opened fossil lab at Drexel to help train and supervise other volunteers (this was in the old cramped lab - I never actually got to work in the big beautiful lab that all the Dreadnoughtus press images showcase). Volunteering at the museum was one of the greatest things I've ever had the opportunity to do, and I've met some incredible people through there.

Ok now on to the second reason why I'm taking the time to write about this. As I've mentioned, the paper is free online for everyone to check out. As a part of this, all of the supplemental materials are also available. This also includes 3D laser scans of the entire skeleton! If you've been following this blog for a while, you should know of my interest in scanned fossils. I kind of owe a lot to them, actually. 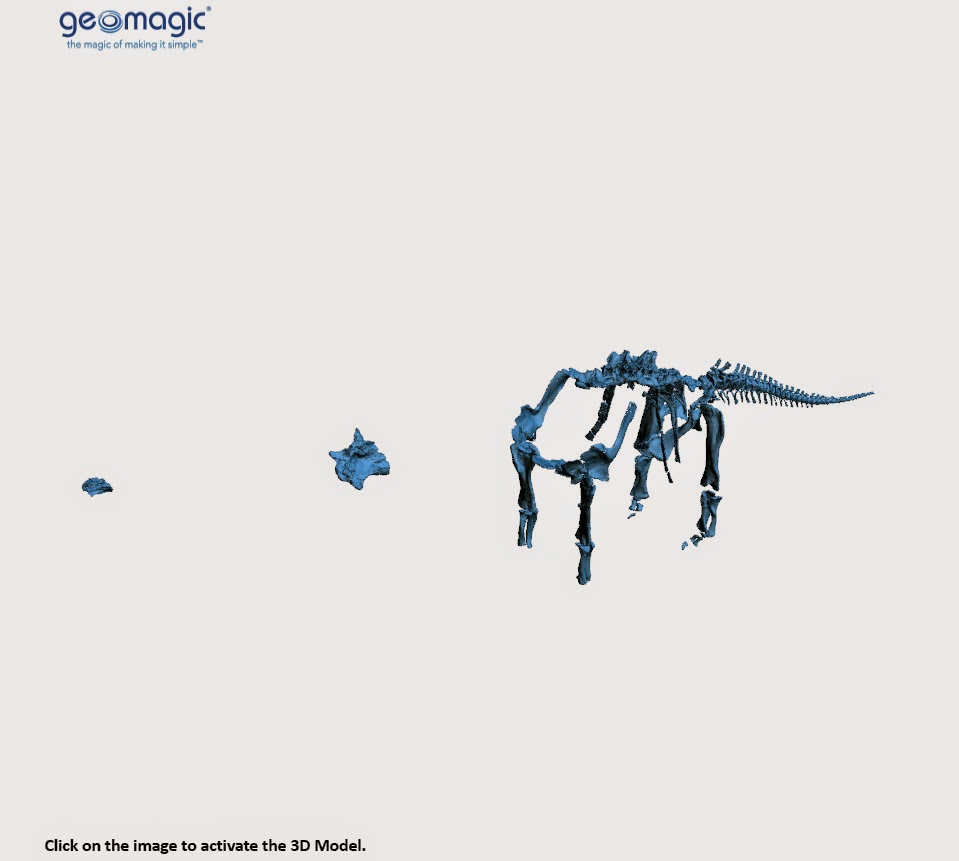 Dr. Lacovara standing next to the femur - from here.

But the life restorations associated with the press release are hard to get a true sense of scale from (Mark Witton also wrote a bit about this), since the late Cretaceous doesn't really have any familiar points of reference for us humans (nothing against the artists at all, I was having trouble with the same problem with my own restoration work). The same goes with the 3D data. You can tumble around and examine the bones quite nicely, but virtual space is particularly difficult to inherently understand scale. 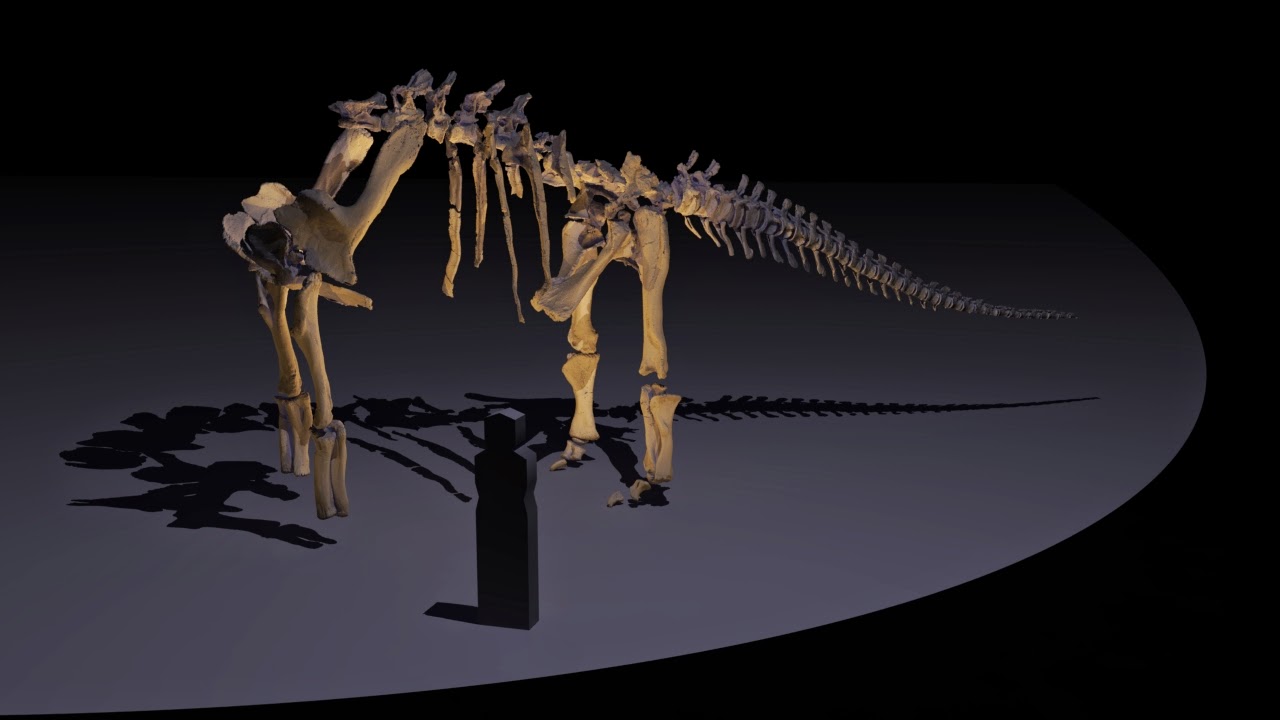 Proxy mesh of 'me' standing next to an illuminated Dreadnoughtus "mount"

So with that thinking, having access to the data, I brought it into Autodesk Maya, and built a scale proxy model of someone my height (6'3), and parented a camera to the 'head.' I then slapped together a rough animation and some lights to visualize how big the animal would appear to me, if I were standing right next to it. I thought this was a particularly interesting point of view since next year the bones will have to be shipped back to Argentina, and there's no guarantee I'll ever be able to see them again in person. The video is not the prettiest thing in the world (I didn't bother making an environment), but I think it gives a pretty good idea of how big Dreadnoughtus was. Particularly the part where the camera looks up the neck, and sees the lone cervical vertebra floating off in the distance. If only the rest of the skeleton was there, it'd really drive the point home!


So anyway, That's what I have to say for now about this guy. Seeing the pictures after all these years was like seeing an old friend again. I'm so happy for my friends and colleagues who brought Dreadnoughtus schrani to us all, and am incredibly grateful to have had a small part in it. Congrats everyone!