So I'm just about finished with my current sketchbook, and there are a lot of misc. things in there. This sketchbook spans the time from last fall until now. so here's a bunch of random things:

So where to start? There's another concept for my evolution animation idea, as well as some dino sketches, including an extremely inaccurate/unrealistic Edmontosaurus. We also have a pig demon riding a babirusa for some reason. Then a sweet imaginary bird-like thing, a stylized turtle, and mechanical Frigatebird (Fregata magnificens mechanicaliensis). 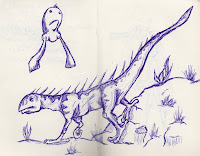 Here we have a crocodile, some sort of strange Parasaurolophus-humanoid alien thing, and a giant angry rodent. 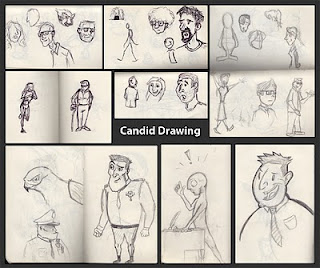 This here is the result of misc. people-watching excursions around the city this year. When I'm waiting for a train or if I'm early to an event of some sort, I'll usually take the time to practice drawing and get ideas from the people around me. All of these are sketches of random people, or are characters inspired by real people that I spotted. They are all from various places in Philadelphia. 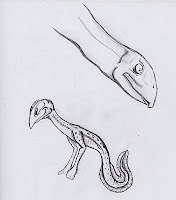 Here we have an exaggerated, cartoony amphibian of some sort, along with a creature, combining influences from sauropods and fish. 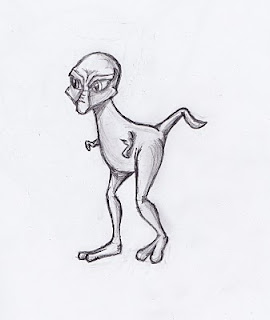 Yet another creature concept

A sketch test for the header banner of this blog. 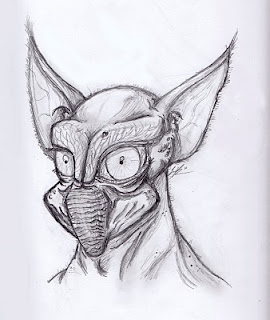 A strange alien thing that I drew the night I decided to start blogging. I haven't spent so much time on a single still image in a while, so this was refreshing. There are lots of different influences in this. I didn't give this guy any sort of back-story or name yet. This is just the result of me sitting down and letting my mind wander. 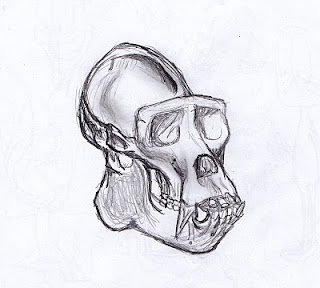 ...and here's a quick sketch of the skull of a Mountain Gorilla (Gorilla beringei). That's all for now, Now that this collection of images is up I can continue to just post things as I draw them, opposed to posting mass collections of stuff every couple months.
Posted by Evan Boucher at 12:50 PM No comments:


I did a number of rotoscope tests last year in order to help me better understand animal locomotion. I drew on top of footage found at bbcmotiongallery.com of a number of different animals. I made sure to simplify the drawings down to simple stick-figures to really focus on pure movement. I find it interesting how much of the motion comes through with such simple drawings. This was done in Flash, and the 3D Rotos were done in Maya. The animals are in the following order: fish, secretary bird, crocodile, white rhinoceros, bald eagle, double-crested cormorant (not a rotoscope).
Posted by Evan Boucher at 11:53 AM No comments:

This is the Blumblour...a creature first developed for a CG project years ago. Here is the rundown on these massive fictional creatures:

A full grown male blumblour can get up to 10 ft tall. They live in patriarchal herds, which travel long distances together on yearly migration routes. Blumblours sometimes develop symbiotic bonds with various types of vegetation, which grow directly on their bodies. The plants protect the blumblour from various pests and parasites, through various methods. Some carnivorous plants will eat these parasites, while other plants will secrete chemicals that repel them.

Blumblours are herbivorous and use their tentacle-like arms to stretch out and grab plant material - mostly mosses and lichens. The tentacles are also used in locomotion. They slowly pull themselves along the ground, while using their tails as rudders to help propel forward. 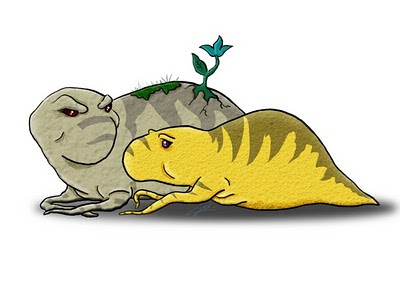 Posted by Evan Boucher at 11:44 AM No comments:

Last summer I came up with an idea of an animated piece revolving around evolution. That is all I'm at mercy to tell you all...as I still plan on making it one day. I'm not sure what form it will ultimately take, but there are lots of plot elements that need ironing out. As of now it's only in a conceptual stage. I also don't know if I want to try to cram something of this complexity into a short, or do a series of episodes, or wait until I have the chance to try and turn it into a feature. I think there are so many possibilities with this idea... Anyway, here are some various creature concepts for this thing. I'm sure as time goes by you'll see some more concepts popping up similar to these guys, as I continue to mull things over in my head. 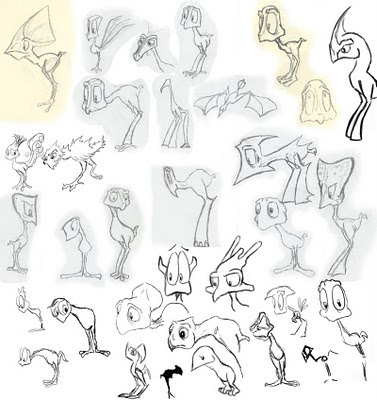 Posted by Evan Boucher at 11:09 AM No comments: 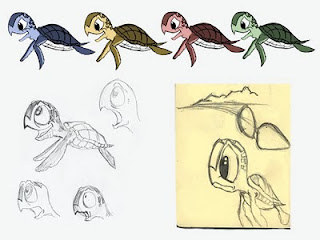 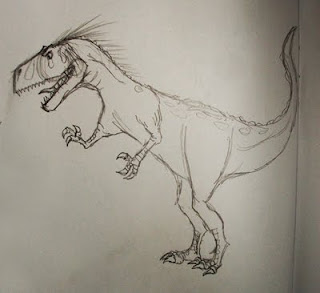 ...and of course a Gharial (Gavialis gangeticus). I sketched this before embarking the incredible journey that is my Master's Thesis. 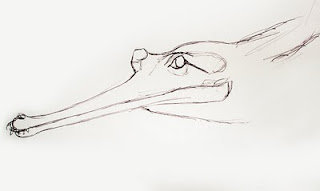 Posted by Evan Boucher at 11:03 AM No comments:

I'm trying to get some miscellaneous stuff up here to fill it out a bit, before I start adding new content. This post is misc. bird sketches from last summer, when I created a cormorant to help me learn Houdini. The bird was modeled in Maya, textured in Photoshop, sculpted in Mudbox, and then the feather instancing was all done through SOPs in Houdini. It was also rendered in Mantra. On the left are various Double-Crested Cormorant Sketches (Phalacrocorax auritus). At the time I wasn't sure which bird I should create, so I was also thinking of the Secretary Bird (Sagittarius serpentarius). 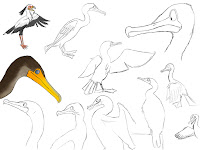 After the deciding on, and modeling the cormorant, I rigged him and re-purposed him to act as the antagonist of my short First Step from last Fall. 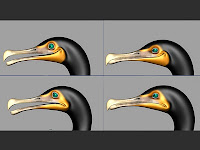 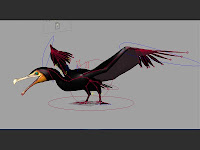 Posted by Evan Boucher at 10:54 AM No comments:

So to kick this puppy off, I will elaborate a bit on the purpose of this blog. This is where I will continue to update various (primarily) character and creature design sketches. I hope to push my limits and test out different drawing styles as I go. I will also update the blog with posts of various video/animation work as it comes in.

It's an open pallet to keep the creativity going. So some weeks you may see lots of sketches, and others you may see various animation or rigging demos. To start, the first couple of posts will be of older things I've worked on, just because they fit the theme of this blog so very well.

So let's start with the Serpiiken (Serpenpullus brachioflagelli). This creature first appears as a mount in a museum in this matte painting compositing project from a class last winter...

Here is the original concept art for the Serpiiken: 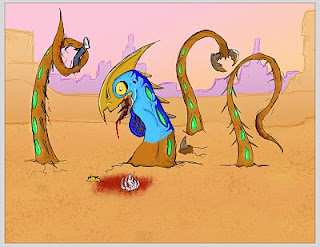 Posted by Evan Boucher at 11:14 PM No comments: