A Note on Paleoart Compositing

This is something that has bugged me for a long time now, and only realized what the problem was in the last few years...so here we go.

Over the past decade and a half there has been a major surge in paleo-themed educational programming on networks such as the Discovery Channel. Despite all of the advancements in the technology behind these sorts of programs, there is one aspect of them that never seemed to catch up... despite it being a simple fix that any trained compositor should know how to do.

Many of these programs like to simplify the production process, as well as enhance the believability of the images by filming background plates, and compositing the animated extinct beasties into the shots. This is a great technique, which provides photo-real environments (since, well, they are real) without requiring digital artists to recreate entire paleo-environments from scratch.
Putting aside any problems and inaccuracies in modeling, shading, or animation of the creatures, these programs almost never seem to be well composited into the environments. Sure lighting is taken into account, secondary effects like footprints, splashes, or rustling of plants are added, and everything is done correctly when rendering the images out of whatever package they may be using. But what needs to be realized, is that simply rendering the thing out and slapping it on a background isn't all it takes to sell these things. It is only the first step.
The images need to be tweaked and tweaked and tweaked, then watched, and re-tweaked until they are as integrated as they can be for the given production timeline and budget. Most of the time, the images are very close to being final, but there is always one part that the people working on these programs somehow always miss.
Film has artifacts. There is film grain, motion blur, depth of field, lens flares, noise, lens distortions and film scratches that happen as a result of shooting live plates. When images are rendered out of CG software, they have a tendency to look too clean. These clean, sharply high resolution images layered on top of filmed footage (with plenty of grime and artifacts) simply look wrong. It takes the viewer out of it. The fix to this is to dirty up the rendered frames in the composite. It is way easier to dirty up clean, sharp, unnaturally perfect renders than it is to clean up dirty film. I understand that a lot of time is put into the textures and shading of the animals, and one might not want to dirty up his or her images because of all that time put into making everything beautiful, but these renders are only one element of the final image. If the composites aren't convincing, the viewer will have a hard time believing they are looking into the  past, no matter how good everything else is.
It is a very simple fix that not enough people seem to take the time to do. Adding and adjusting grain, noise, and defocus nodes to a comp, as well as simply grading them properly, is a relatively simple final step to making these things feel fully integrated.
Here's an example to help illustrate this from a personal school project of mine (click image for larger view):

This post was inspired by the fact that I just finished watching David Attenborough's  "First Life" on discovery channel in full HD. It was gorgeous, and the animation, and shading in particular, of the critters was truly top notch...possibly even the best I've seen on the Discovery Channel to date (the rendering of Opabinia was particularly inspiring).
This being said, the final step in compositing mentioned above wasn't taken into account as much as it should have been. It was way better than a lot of these types of programs, but some things still seemed just too sharp. It took me out of the informative narrative and encouraged me to write this post.
Sorry for the length...I really didn't mean for it to go this long. Moral of the story, we need better (or at least more attentive) compositors in the realm of paleoart programming. The end.
-Evan B.
Posted by Evan Boucher at 8:25 PM No comments:

This is different from a lot of what's been on here lately. A good friend of mine asked me to draft up some designs of Jack-O-Lanterns for Halloween. I thought this was an excellent opportunity, considering I haven't carved a pumpkin in years. I ended up going into Photoshop and building a contact sheet full of sketches of unique ideas. I'm tired of the standard jack-o-lanterns and decided to put my own style into it. This only took me about an hour, and made me realize that this is a great way of picking out a face for anybody's next pumpkin. Always start on paper! :)

I hope you enjoy them, and if anybody actually decides to attempt to carve any of these (i'm not sure how well they would work in the real world), please send me pictures at evan.m.boucher@gmail.com and I'll post them up here! Special thanks to Susan for inspiring this idea. 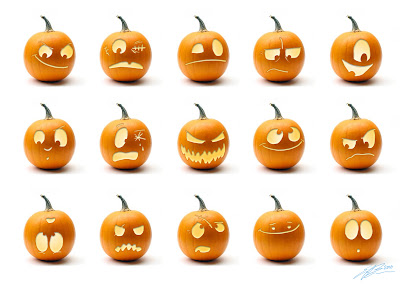 It's been a while since I've posted....and it's NOT because I haven't been drawing or creating. I've simply haven't had the chance to scan any of the plethora of sketches I've done since last post.

I have a couple things for you here. First off, is my completed Master's Thesis. I figured I'd share it on here for anyone who's yet to see it. The project was a heavily researched restoration of the extinct crocodylian, Thoracosaurus neocesariensis. The fossil source (NJSM NH 2005.2) was digitized in order to help the project stay authentic in its attempt at realism. For more about the process of the project, see here.

Also, just to keep me occupied I've been trying out my new Wacom Bamboo Fun tablet as well as playing with Autodesk Maya 2011. Here are some work-in-progress images of a Camarasaurus I've been modeling. This differs from the above project in that I skipped building the skeleton and muscles and went right for the skin. I did, however, use skeletal photographs as image planes to get the correct proportions and make intelligent decisions while modeling, so its not like the result is completely invented. I also did some light background reading on the discovery, features, and phylogeny of Camarasaurus to keep this exercise somewhat informed. 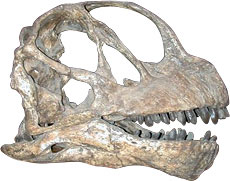 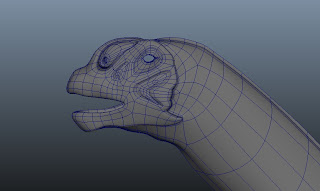 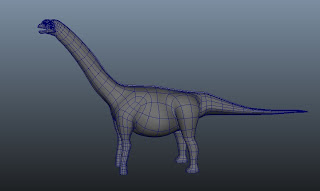 There are still teeth and toes to be modeled, and overall cleanup. I'll post the final images once this guy is completed. I definitely would like to take the time to sculpt and texture him.  Depending on how much time I have I may even rig him up and do some experiments with animation.
-Evan
Posted by Evan Boucher at 5:29 PM No comments: