Invasion of the Tetra Pod-Cats

So this is just a silly little thing I whipped up this weekend. It's inspired by some of the zaniness that comes up in the Tetrapod Zoology Podcast. While listening one episode, I got an image in my head of a stylized cat flying around in a little space pod, and after some rough doodles I decided I liked the idea enough to flesh it out more. So that's how I got to this: 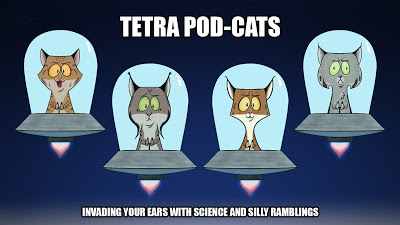 Clearly the drawing required not one, but four Pod-cats to make my pun, and it just so happens that there are four species of Lynx (which also happened to be a topic covered recently on the podcast podcats).

So left to right they are: bobcat (Lynx rufus), Iberian lynx (Lynx pardinus), Eurasian lynx (Lynx lynx)*, and the Canada lynx (Lynx canadensis). You can see their species names embossed on the hulls of their ships if you ever get confused.

So there you have it, the Invasion of the Tetra Pod-Cats.

-Evan
* I imagine him to be the leader of this bunch - he looks the most serious about the invasion
Posted by Evan Boucher at 8:25 PM 3 comments: