Howdy folks! After finally posting things from my SideFX Internship that I did back in 2011, it got me thinking about how I don't really talk much on here about what I've been up to in my current job.

Well, now that some cool stuff has showed up online, it's time to post some cool things. Today we have some footage from 'Penguins of Madagascar.' It comes out this Thanksgiving. You should all totally go see it. Here's the first teaser that was released a while back:


And if that doesn't convince you, this scene was released yesterday at Comic-Con, and shows the tone of the film pretty well:


This scene is particularly exciting for me because it directly shows off a bunch of my work! I was primarily rigging faces on this movie, and set up the face of the baby seal, did some work on the wolf, and rigged all of the octopus faces, including the big baddie 'Dave' (John Malkovich). Dave's face rig is definitely one of the coolest things I've ever done, and I can't wait for everyone to see him this fall. That's all I'll say for now :)

And speaking of DreamWorks related things, I'll try to post some things I did for 'Mr. Peabody and Sherman' sometime in the near future. Stay tuned!

Last time, I mentioned I would try to dig up some of my animation tests from the upcoming short film 'MONSTRO!'which is directed by Christopher Romano.

Well I've went ahead and done exactly that! Below are some early and rough animation tests I did when exploring our Houdini pipeline. I was figuring out how to best set up shots, as well as doing some major rig-wrecking. None of these are particularly incredible, and as you will see I didn't even have clothed models or textures to work with yet, but it was a fun exploratory time. If nothing else, it will help give you an idea of how I spent most of my internship a number of years ago. Well...most of it, anyway.

First up, we have the first animation test done for 'MONSTRO!' I was exploring the process of animating characters in Houdini while also assessing the first pass of the body rig, which was based on the Houdini auto rigging tools. There wasn't a face system yet, which I ended up having to develop later. I was also making sure to test out ways of having characters interact with props and the environment in Houdini. This test was animated in 12 fps to test a stop-motion style look, which was being explored for the film:

Next, we have a lipsync test. This was done to test out the first pass of the face rig I developed. I was seeing how far I could get with extremely limited controls, and to get a better idea of what necessities were still needed in the system. The face rig was a limited blend-shape based rig, using CHOPs expressions to mimic a 'set-driven-key' type of behavior (for those familiar with Maya), and some fancy SHOP network magic to add in some asymmetry. The audio is Pappy O'Daniel from 'O Brother Where Art Thou?'

After that, I thought I'd post this weird cloth sim animation test. It was created to have something to test parameters on, for a first-pass DOPs/CHOPs based cloth rig system. Obviously these particular settings don't work very well, but I also should have expected that due to how pushed the animation was :) It was fun to go really goofy with it.

And finally, after getting a working body rig, and developing and improving the face rig system, I went ahead and did a full body dialogue test to see how well the character would hold up when acting.
The rig is pretty limited, so this test was more to see how far I could push it, and to explore ways to get some more traditional animation concepts in there. The goal was to make it convincing despite the limitations. The audio is Ray Stantz from 'Ghostbusters.'

Welp, I hope you've enjoyed these goofy little tests. For more, be sure to check out the MONSTRO! channel on vimeo. Also keep your eye open for when 'MONSTRO!' comes to a town near you! You can also keep up with the film on facebook and twitter, if you so desire.

This is probably it from me on this subject, at least until the final film appears online, which I will be sure to post when it is released publicly.

Posted by Evan Boucher at 10:45 PM No comments:

Today I went with a bunch of friends to the California Academy of Science's "Skulls" exhibit in San Francisco. If you know anything about me (which I'm hoping you do if you're reading this blog), then you know that I'm fascinated with animals and their anatomy. Bones in particular I've always found fascinating, and since I've always gravitated toward doing art related to faces and facial expressions, skulls are kind of my favorite. 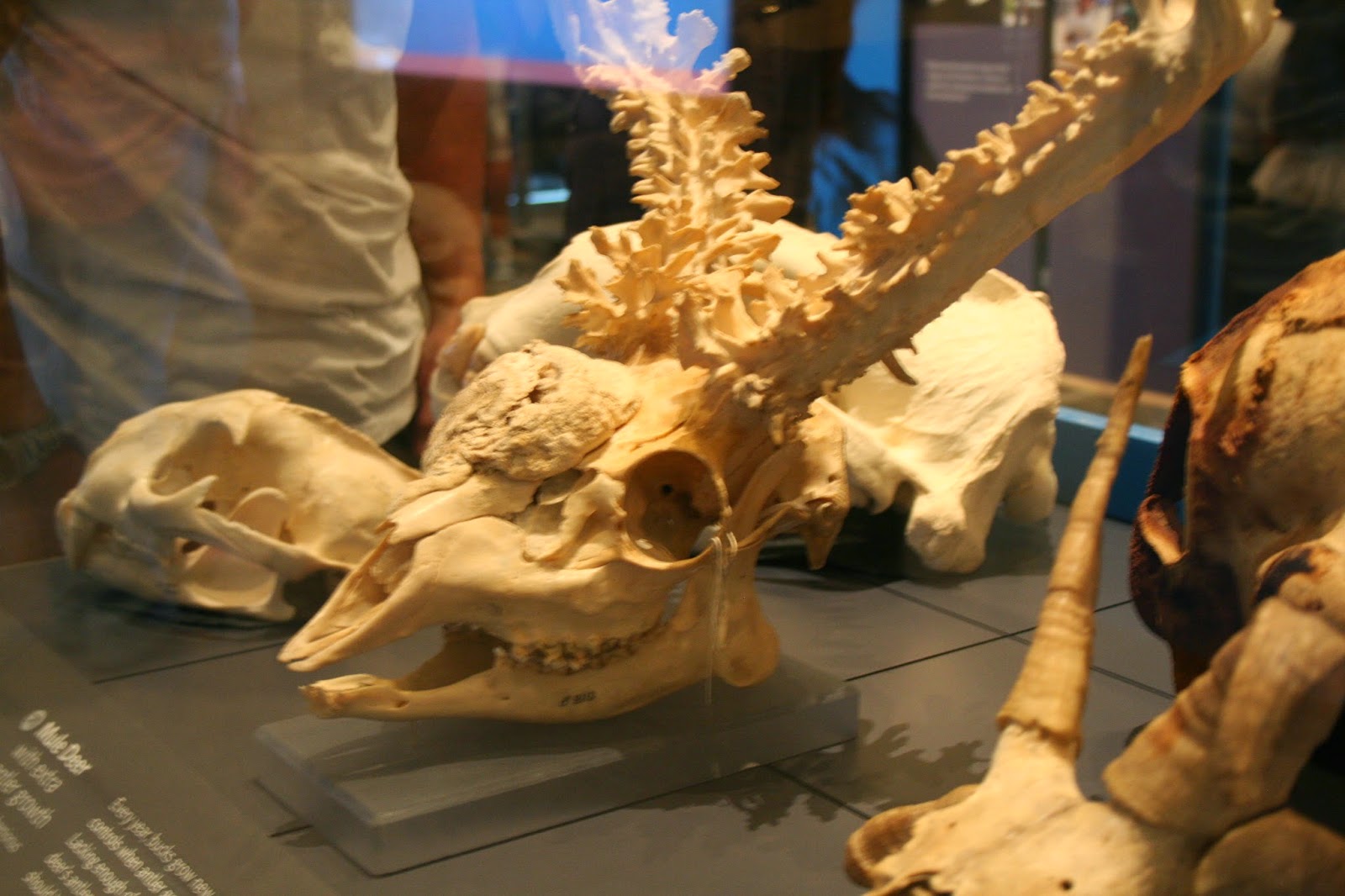 While there, a bunch of us did some sketching. I'm not particularly happy with any of the sketches I came out with but it was a lot of fun just sort of roughly block stuff out. I was enjoying the process a lot, which is nice. 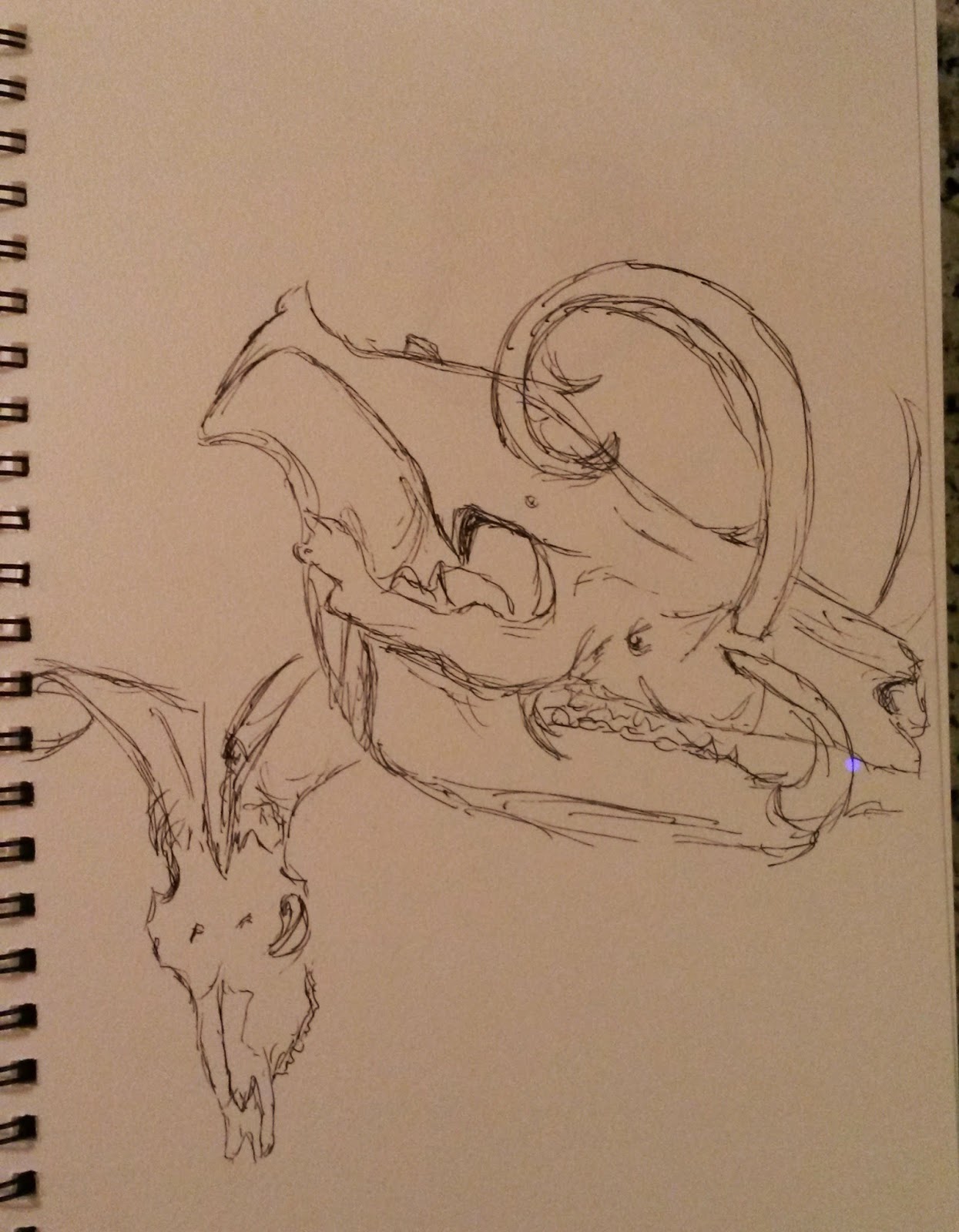 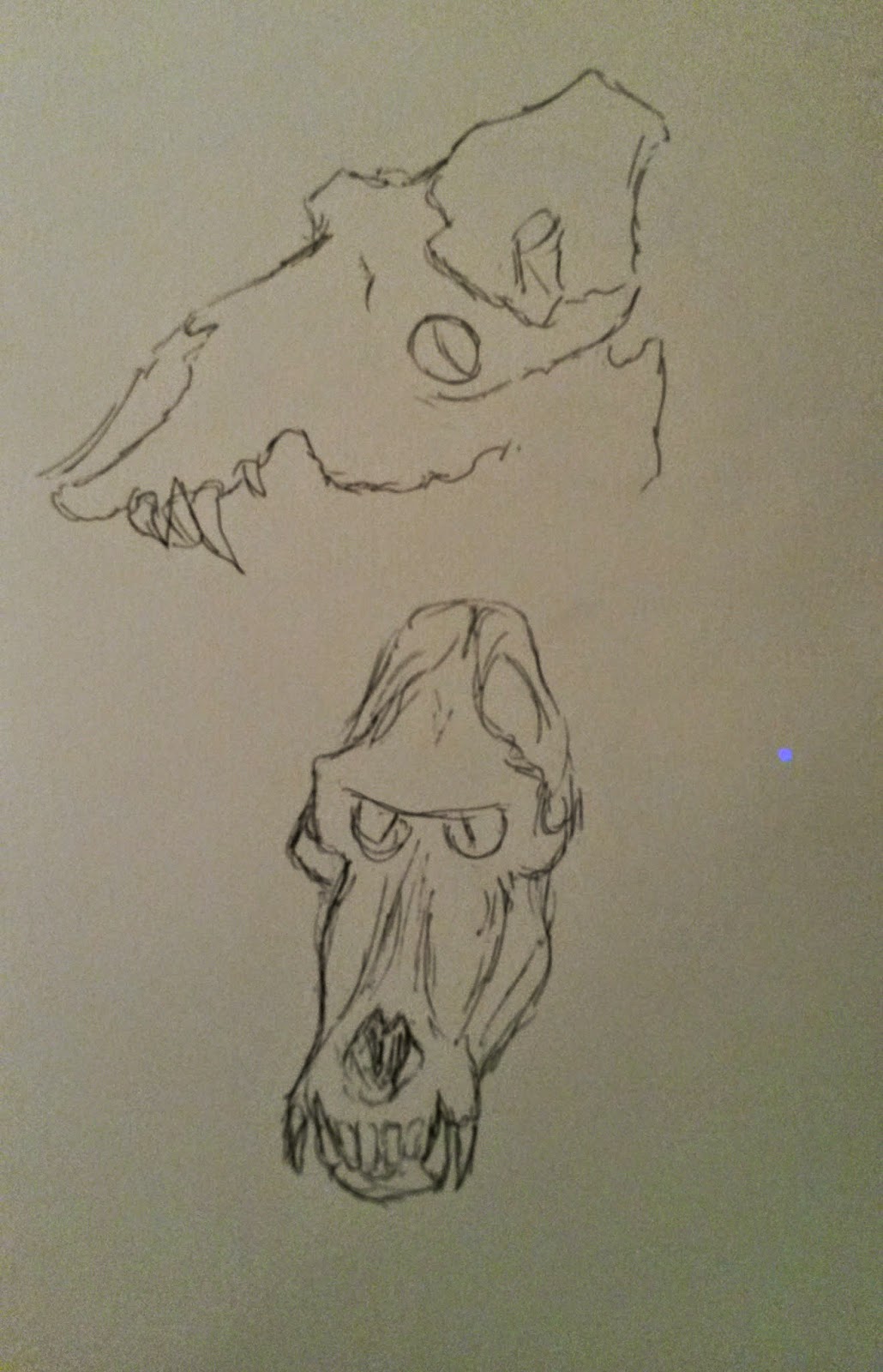 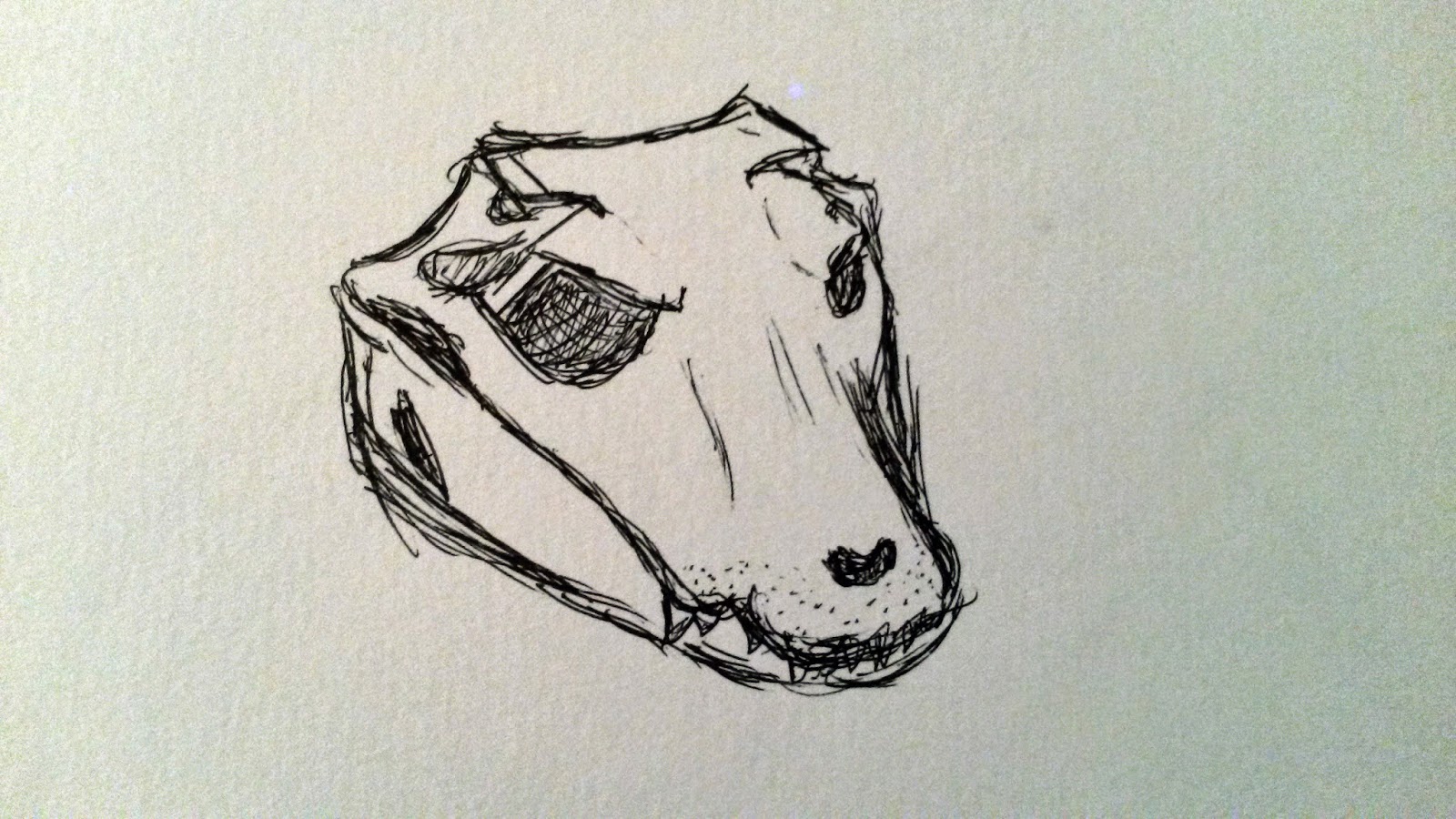 The exhibit was fantastic. There was a large variety of things, and they  put many diverse animals right next to each other to hammer home just how much variety can be seen in the same basic layout. There were mostly mammals, but plenty of birds, reptiles, and fish as well. I was basically like an ADD kid in a candy shop, overstimulated by the amount of stuff they had in there; constantly getting distracted from the cool thing I was looking at by another equally cool thing that I caught out of the corner of my eye (this is also what I will blame my lackluster sketches on  - I was too excited by the plethora of things to really focus on any one subject). Overall lots of neat things! I highly recommend it! :D

Here are some bonus images: 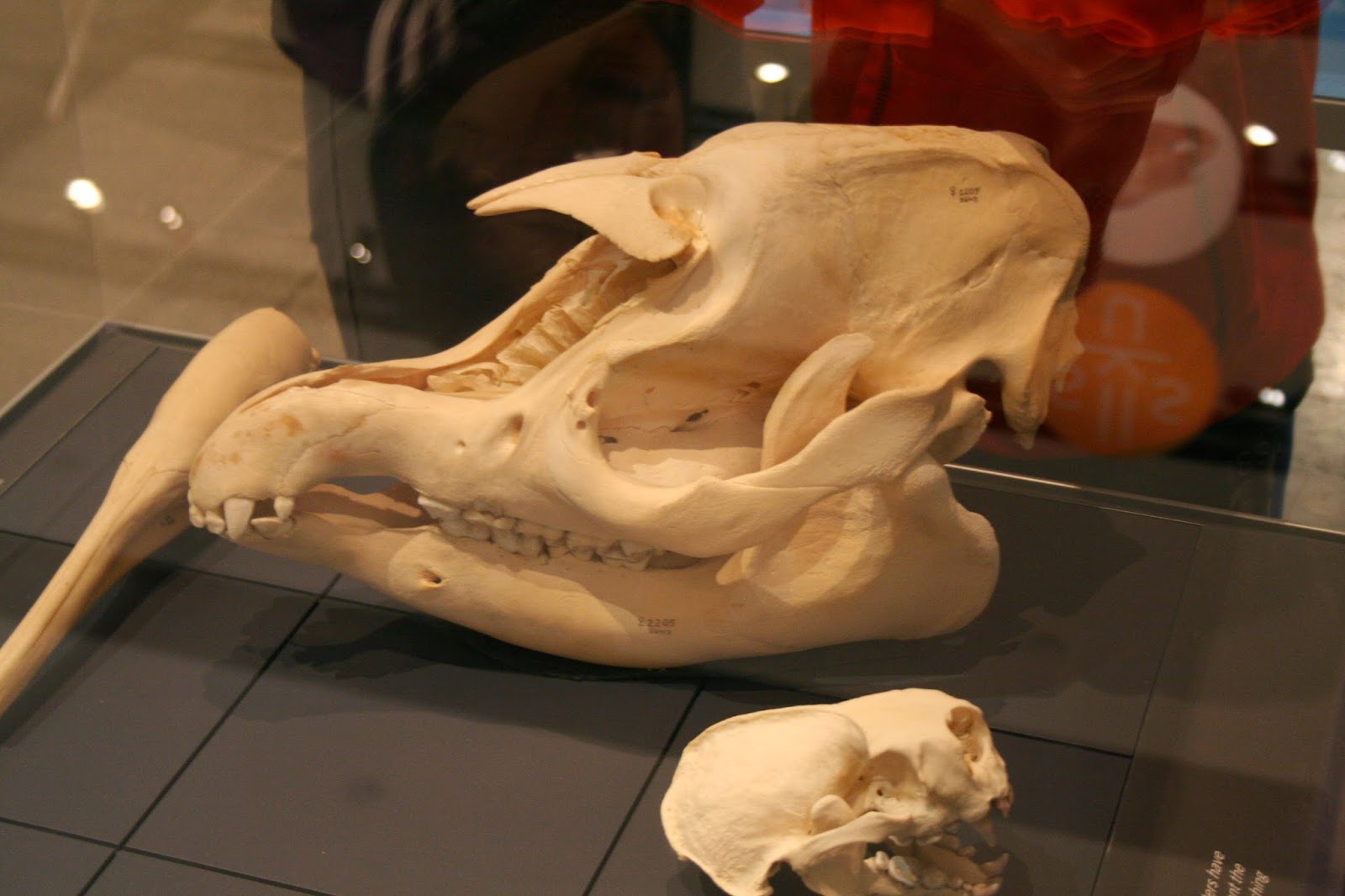 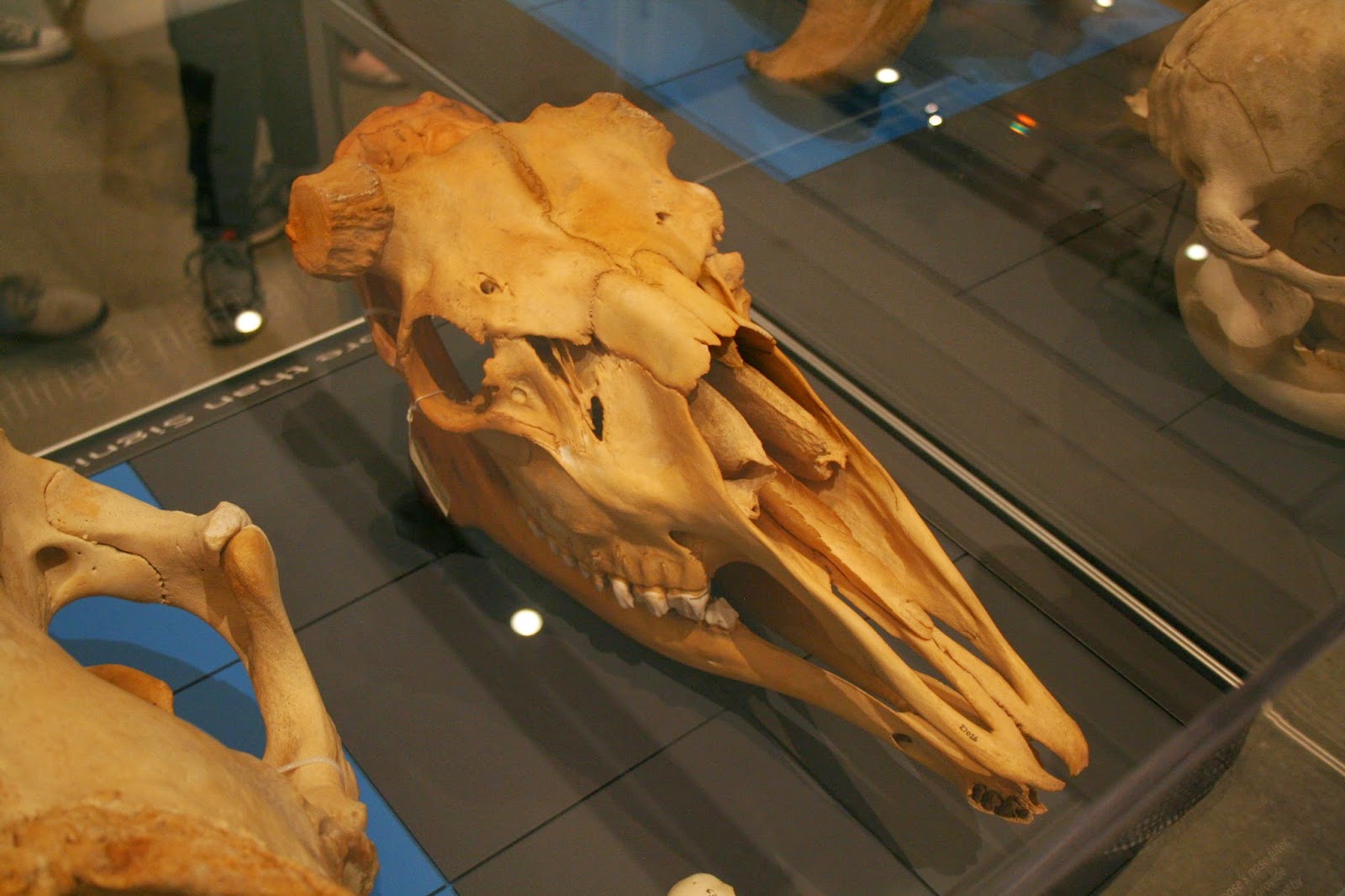 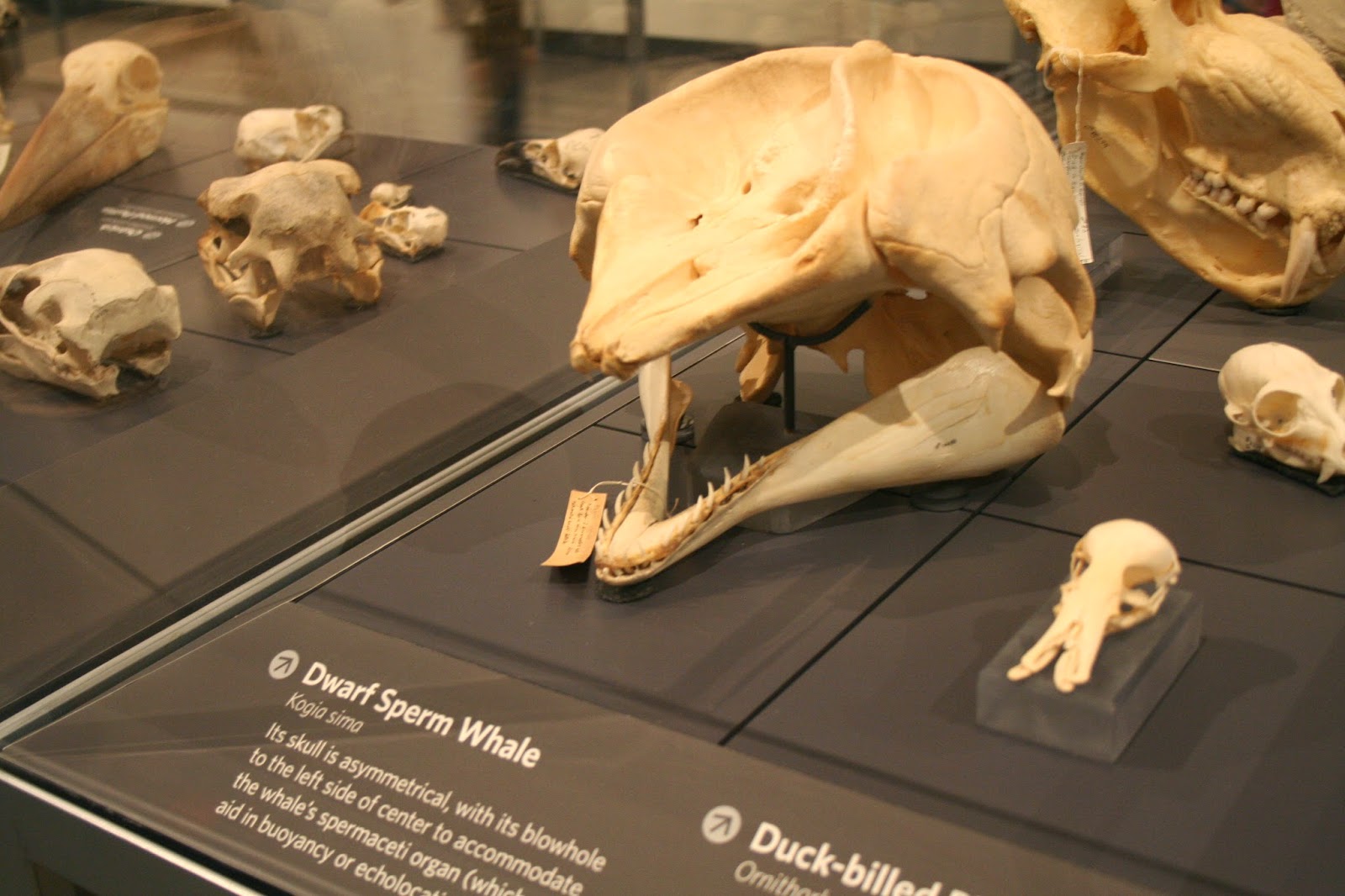 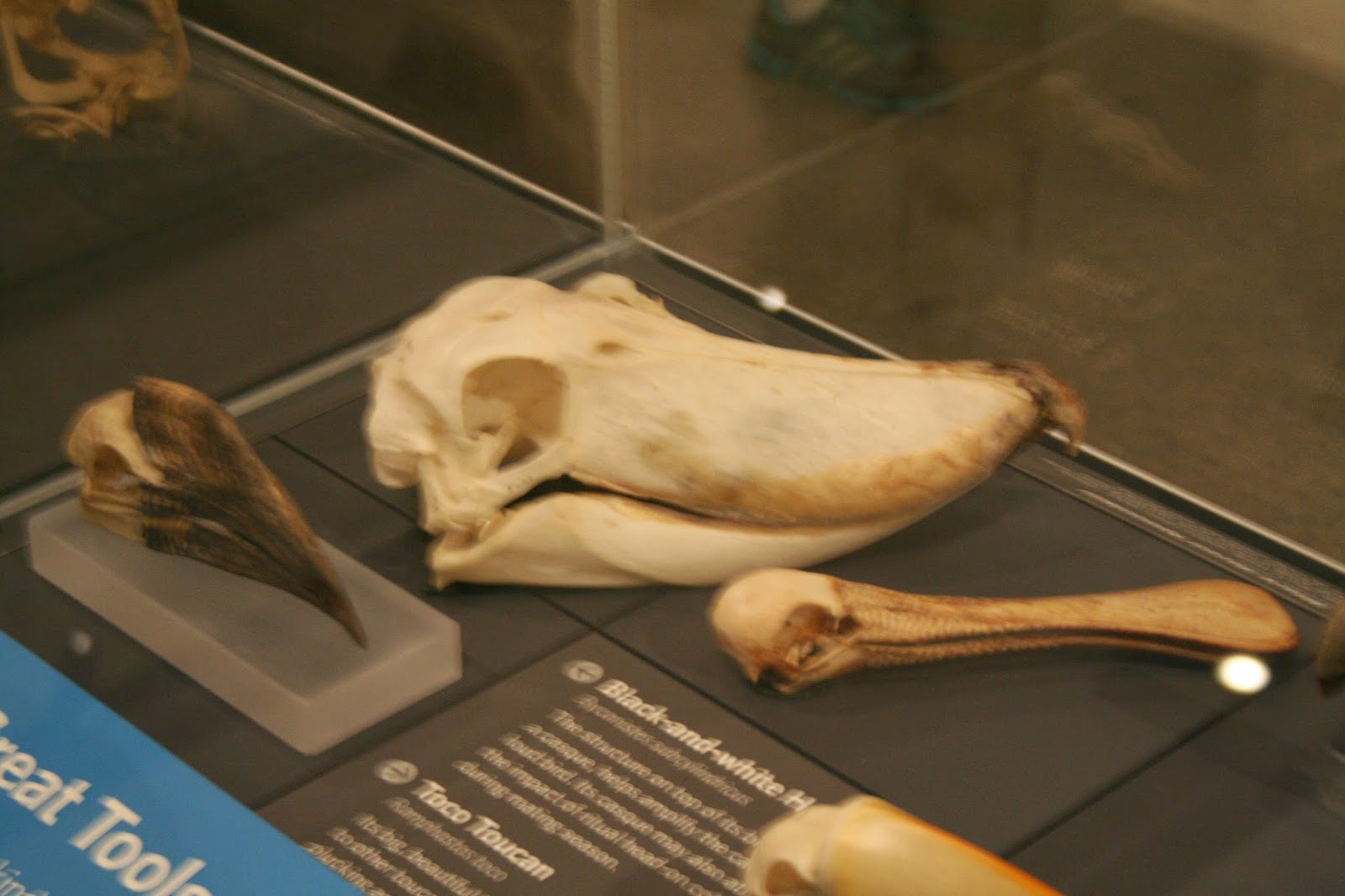 The ever-popular B. rex, with his Spoonbill, hornbill and toucan friends 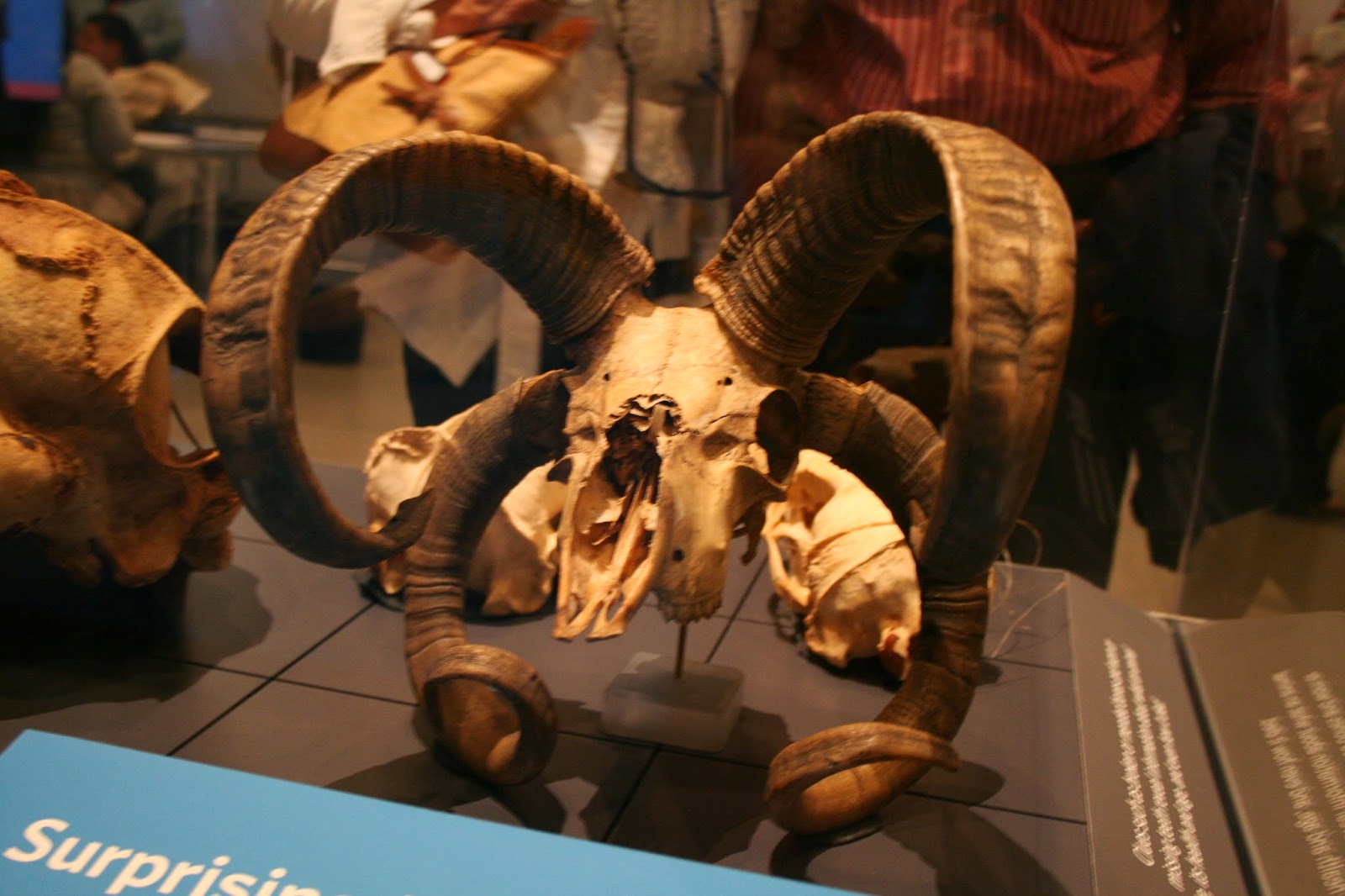 One of those crazy four horned sheep


You should ALL go if you can! There is PLENTY of things I haven't spoiled here, like Elephants, and a WALL of sea-lion skulls, that challenges you to use your comparative anatomy skills to pick out the non sea-lions. Oh, and the rest of the museum is really pretty great too. But don't take my word for it! BA-DUM-BUM!

Posted by Evan Boucher at 9:06 PM No comments:

Shameless plug time! Three years ago, when I first made the move across-country to California, it was to start an internship animating on a short film. That film is finally coming out! It starts the festival circuit this week, and you should check it out if you have the opportunity.

The film is called MONSTRO! and it's written and directed by Christopher Romano as a part of a joint project with Side Effects Software (PSSST! That's the HOUDINI guys!). In premise, it's a comedic animated spoof of the classic Universal Monster movie, The Creature From The Black Lagoon, but there are plenty of surprises. It's quite silly and fun.

This project means a lot to me because it is really the first time I was working on a CG project outside of school, and the first time I actually got paid to animate, and play around in CG. The people behind the film put a lot of faith in me by offering me an internship when I was some 2700 miles away, since I was willing to do character animation in Houdini (That's right, pretty much everything except for modeling was done in Houdini for this project). That internship was a HUGE step in launching me on my career path, and I couldn't thank my friends and former coworkers enough for helping me make that happen.

But enough sentiment - for the film, I was brought in essentially for character animation. I was given a lot of freedom to experiment with different animation styles before the production started. I spent a lot of time with the first few characters, particularly these two:

I did a number of animation tests helping to define and develop their movement styles and personalities (which I may post soon, if I can dig them up). I believe the final film only has one short series of shots that are my final animation, but I ultimately ended up setting up a lot of the pipeline, and designed the face rigs, since there wasn't really any out-of-the-box or established ways to work with faces in Houdini (Most if not all the rigging specific tools, including the auto rigs, are very body-centric). So I learned a heck of a lot and had a lot of fun working on this project.

Anyway, keep your eye out for it. You can find the festival schedule here, so if it's in your area, you should go see it. Also you should be sure to 'like' and 'follow' it to help get the word out there!

-Evan
Posted by Evan Boucher at 9:10 AM No comments:

Over at 90 Minute Comics, the words for this week were 'Canvas' and 'Waves,' so it felt natural to just paint a quick Canvasback (Aythya valisineria) - 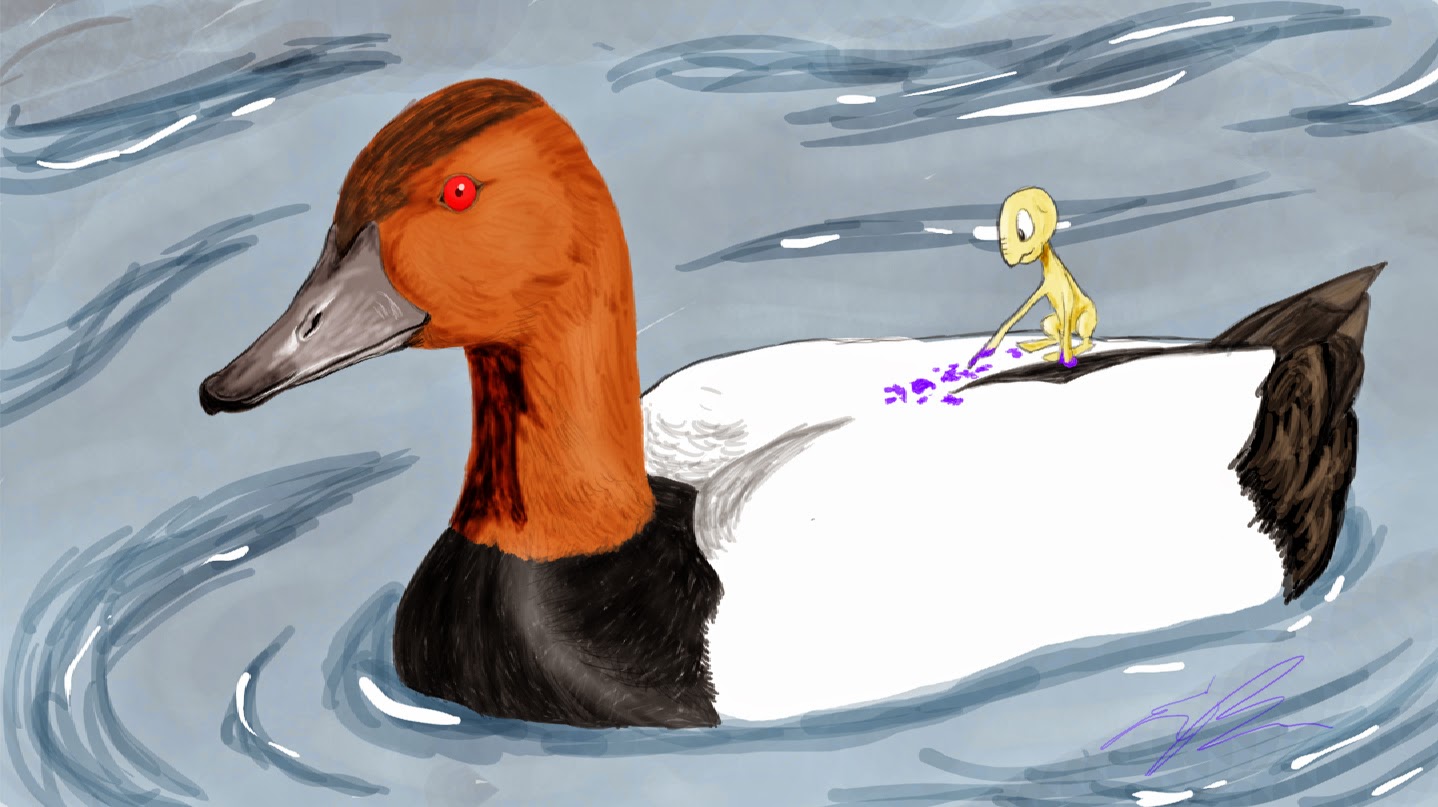