Whoah Physical Media! What is this nonsense?

Since I spend so much of my time these days solving technical problems, I decided to enroll in a sculpting class once a week after work to help me keep my creative brain working. One reason I chose the sculpting class is because I haven't done any real sculpting before. I've dabbled, but usually just playing around, and not trying to actually to improve my craft or anything. The closest  I've gotten to real sculpting has been in the form of digital detail sculpts and this thing. So this has been a relatively new and challenging experience for me. Hurray for learning! 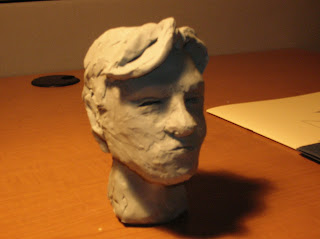 We're about halfway through the class and in each session we just do gestural bust sculpts based on a model for about two hours. Here's what I ended up with today. Still incredibly rough, but I guess you can't be expected to be amazing at anything on your first go. 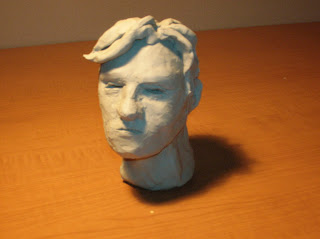 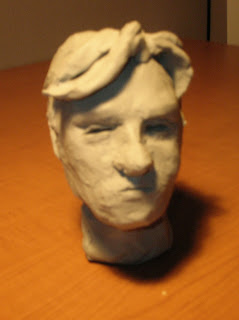 -Evan
Posted by Evan Boucher at 9:23 PM No comments:

Hello all! It's been far too long since I've posted. Been busy at my new job, but have also been trying to keep sketching when I can. Today's post actually consists of some older work, but is something that is incredibly personal. Some of you may have seen these guys before, but probably don't know a whole lot about where they come from. So I thought I'd give my first true online introduction to the world of BIRDSQUAD: 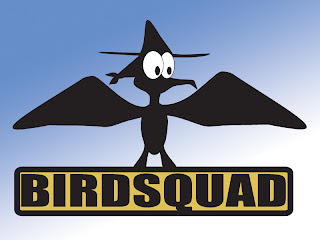 BIRDSQUAD is a passion project of mine, that has grown and evolved throughout my life. It started as a comic book that I started drawing in 4th grade (yes you read that correctly). I remember first creating this when I was in my basement in Virginia in 1996. I wanted to make a comic book hero that I really liked and felt motivated to draw. Instead of a typical superhero, I wanted to explore making a much more cartoony character. I wanted to combine superhero elements with the type of whimsical, sometimes nonsensical humor of a cartoon. So I drew upon my childhood fascination with the Galapagos Islands, and created the principle character of BIRDSQUAD: The Masked Booby. I continued to draw very short, very rough comics, and by the year 2000 I revamped the Masked Booby series, transforming it into BIRDSQUAD.

Throughout High School, I worked on a rough animatic about the origins of this group of characters. This was done in MS Paint (yes with a mouse) and crudely put together to music in Power Point. This "animatic" (as rough as it is) was my first true endeavor into digital art. It put me through my first true all-nighters (from the pure joy of creating the story), and was a major stepping stone in getting me started on the journey to where I am today. Despite having started these characters so long ago, I constantly return to them. I actually still have all of the original 12 Masked Booby comic books, as well as the three-part, half-hour long  BIRDSQUAD Trilogy animatic.

And with that brief introduction, what I want to do with this post is a retrospective look at the members of the Galapagos fighting force known as BIRDSQUAD: 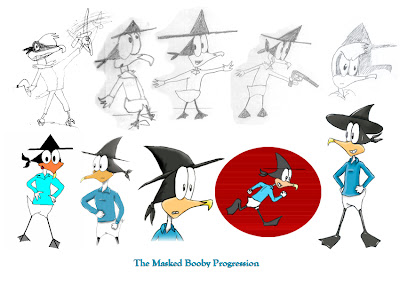 The Masked Booby is the "Leader" of the team. He was the original crime fighter in the Galapagos. This progression shows how he has changed throughout the years. He is a Masked Booby (Sula dactylatra), and that perfect pun opportunity was one of the main reasons I chose him for my hero. The top left is the very first drawing of him, ever. It doesn't look like much, (wow, is that what I thought guns looked like when I was a kid?) but that's actually from the cover of the first comic. The bottom left is the super pixelated version from the animatic I did in high school, and the rest of the bottom are from experiments I did throughout college. The last drawing in each of these progressions is from 3 or 4 years ago.
SUPER CORMORANT

Super Cormorant was the next to join. He was basically a Masked Booby fanboy who just followed him one day and eventually became his sidekick. He was always more of a loyal follower of The Masked Booby than anything else. He is a Flightless Cormorant (Phalacrocorax harrisi). The first drawing in the progression is from his 3rd appearance, on the cover of the first of two Time-Travel related stories. 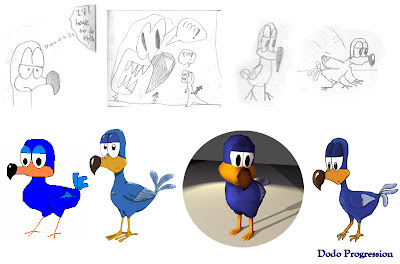 And speaking of Time-Travel, in that story, they accidentally brought a Dodo Bird (Ralphus cucullatus) with them to the present. Despite being a dodo bird, Dodo is probably the most intelligent of the team. He only communicates through thought bubbles, and by "communicates" I mean he breaks the fourth wall to the reader/viewers. He has uncanny abilities that he only uses when they are most needed, and he mostly uses them when he's bored, to simply get the "scene" over with and move on to the next thing. He started out as more of a pet, but my love for this character soon made him an active participant in the team. The 3D model in the lower row is a low-poly game model I did for an interactivity class a couple years back. Goober Booby is actually The Masked Booby's younger brother, who one day showed up on his doorstep, since he was evicted from his home. He is a klutz and a little childish but means well. He joined the group after a second Time-Travel episode, where he proved to his older brother that he could keep up. 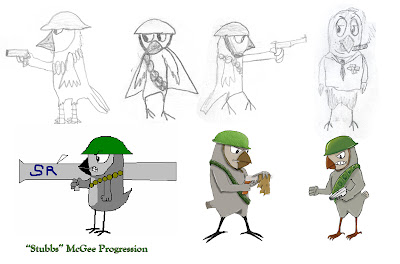 "Stubbs" McGee was an ex-military officer who was recruited by Mayor Softshell as one of the two members of the Galapagos Secret Service - which later merged with The Masked Booby and company to form BIRDSQUAD. He's a fiery hot-head, but also has a great sense of pride and honor. It took him a while to warm up to The Masked Booby when they were first paired together. He was originally created by my brother Ian, who drew the first drawing in this progression. Stubbs is a Large Cactus Finch (Geospiza conirostris). 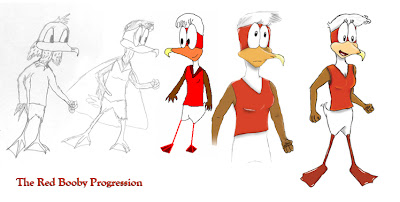 The Red Booby was the second member of the Galapagos Secret Service before the formation of BIRDSQUAD. She is a strategic genius, a tech wiz, and the most logical of the bunch. Although The Masked Booby is the official "leader" of BIRDSQUAD, The Red Booby is the brains behind the organization. She is a Red-Footed Booby (Sula sula).
This post became longer than I anticipated. I really just wanted to show these character progressions, as I think it's pretty cool to see the same character drawn from my elementary school years through my college years. It became longer as I figured it wouldn't be very interesting without some explanation of who these guys are. That's all you get from BIRDSQUAD for now. I don't want to give away too many plot details as I still hope to do something with these characters one day.
-Evan
Posted by Evan Boucher at 11:56 PM No comments: