3D Modeling Project of the Day

So today I decided to play with something different. With the big snow that's been hitting the east coast, I decided if and when I move to California, I may never get the chance to do a fun snow sculpture for a very long time. So with that in mind, I took a shovel, an ice cream scoop, and two and a half hours and built this in my yard. Some of the photos have been manipulated a bit so I could show off the details on the sculpt. Click the images for a high-res view. Enjoy! 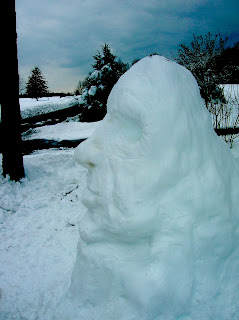 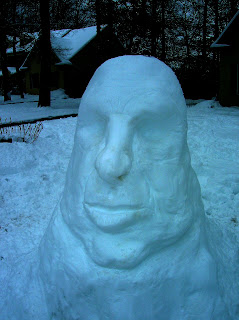 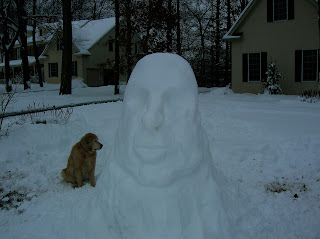 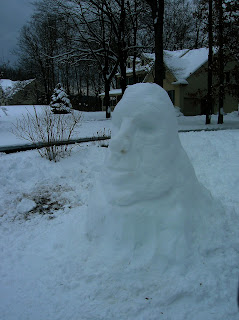 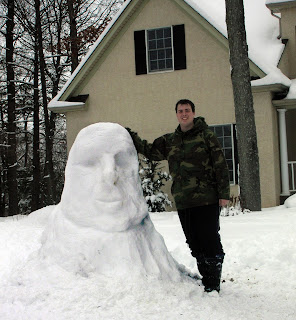 It's been a while since I posted anything, but that doesn't mean I haven't been up to anything. Most of my time recently has been spent travelling (for the Holidays), sending out job applications, and undergoing some independent study to help improve my understanding of higher-level mathematics, as well as programming (related to the job search).

Last post I mentioned the stock rig I've started to push my cartoony character rigging skills, as well as to have a custom rig to do acting exercises with. Overall, it's been incredibly nice to work on a cartoon again, as I'm still sort of recovering from the Thoracosaurus. Below you can see the full model of the stock rig. I decided to give him polygonal hair, to match an early sketch I did before I started building the guy. The hair is on a separate layer though, so different hairstyles can be swapped in and out as desired. This character doesn't have a name yet, so feel free to make suggestions if you wish.

I also have about an entire book and a half of sketches I still need to post, but the logistics of where my computer is compared to my scanner has been preventing me from doing it. Lots of cool things to come when I finally get them posted, though...everything from creatures and cartoon characters, to candid sketches of people as well as animals. Hopefully one of these days I can bring myself to post them.
Posted by Evan Boucher at 5:18 PM No comments: