Don't worry, everyone! I didn't forget about you! Here we are again! With the 2016 edition of Jack-O-Lantern Designs! I hope you like them!! 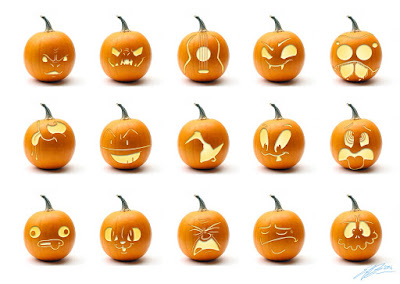 
The same deal goes as every year: if anybody actually decides to attempt to carve any of these (like Stephanie, Nicole, and Josh, Megan, and I did) please send me pictures at evan.m.boucher@gmail.com and I'll post them up here! That goes for previous years' pumpkin designs as well. You have until the end of the month, which is only about a week and change...(sorry about the delay - I believe you can still do it )! I will post all physical Jack-O-Lantern carvings together on Halloween.

-Evan
Posted by Evan Boucher at 3:47 PM No comments:

An Elegy for Rhinos

Hello All! I wanted to share something special today. It involves a bunch of my favorite things, including Character Design, Rhinos, Installation Art, and Conservation.

Earlier this year, our Character Rigging department at work pulled together some interest in doing an art show for the studio. The purpose was to showcase the varied and somewhat eclectic art that us 'CharTD's' do in our off time. I happily signed up to participate.

When trying to come up with my content, I realized that I had a huge opportunity here. There are a LOT of people who work at such a big company, so there would be a LOT of eyes on whatever we ended up displaying. This could be intimidating at first, considering that many of these eyes would belong to some of the absolute top artists working in film and entertainment today (Seriously, the amount of talent in the walls of DreamWorks Animation is absolutely incredible). I definitely had to bring my 'A' game.

I decided to take on this challenge and use it to hopefully do something productive. I realized that this was a good chance to use my own skills to try to make a small difference for something I really care about. After all, I already mentioned there would likely be a LOT of eyes on these pieces. With that thought in mind I immediately knew what I wanted my content to address: The rhino poaching crisis.

Rhinos worldwide are in big trouble. It's something I've grown increasingly aware of over the last 5 or so years. I've been reading a lot on the subject, trying to stay up to date and informed. When I had the incredible opportunity to visit South Africa last summer, and see both white and black rhinos in the wild, it cemented my concern for what's happening to the poor creatures.

Using the research and experience I've collected over the last few years, I wanted to create a piece that was pleasing to the eye, but also didn't sugar coat anything. It needed to be intense in its message, but also not scare anyone away before they got that message.

Because of this, instead of doing anything that was particularly graphic (although I honestly considered painting an image where rhinos had their faces hacked-off with chainsaws while still alive - seriously this stuff happens regularly), I took a different approach. And this is how 'An Elegy for Rhinos' was born: 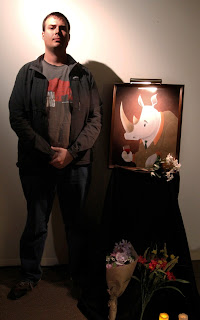 The painting was to be charming and eye-pleasing enough to get people interested in taking a closer look. The installation aspect was to get people to instantly recognize the basics of the message. 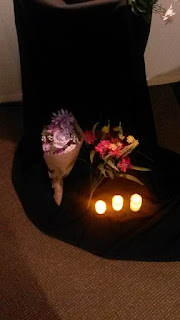 But you might be thinking, "Wow that's incredibly toned down from the graphic ideas you mentioned earlier!" And you are right. It is. (Part of that is by design so that after the installation, the painting could still make a nice piece to hang on a wall - more on that later) However, once I get the viewer to come close to inspect the art, I hit them with this: 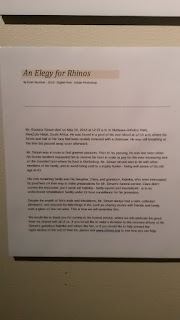 Next to the easel, the rhino's obituary is on the wall. This is where I hit them with the brutal reality of the issues facing rhinos. I wrote a story revolving around this particular character with whom the viewer has hopefully at least found some appeal in, which, in theory, makes his troubles more relateable. The obituary touches on problems with poaching, the issues with legalizing the rhino-horn trade, and big game hunting all within a few paragraphs. I tried to make this text uncompromising. I'm hoping by using a story instead of just a list of stats, that it might help a viewer internalize and feel something about these issues on a more personal level. At the end, I direct them to a real website for the International Rhino Foundation where, if they are so moved, they can actively do something to help the problem.

Here's a text version of the Obituary in case it's hard to read in the image:

Mr. Eustace Simum died on May 10, 2016 at 12:23 a.m. in Hluhluwe–Imfolozi Park, KwaZulu-Natal, South Africa. He was found in a pool of his own blood at 12:10 a.m, where his horns and half of his face had been crudely removed with a chainsaw. He was still breathing at the time but passed away soon afterward.

Mr. Simum was in route to find greener pastures. Prior to his passing, he was last seen when his former landlord requested him to remove his horn in order to pay for the ever-increasing rent on the crowded farm where he lived in Klerksdorp. Mr. Simum moved east to be with other members of his family, and to avoid being sold to a trophy hunter - being well aware of his old age at 43.

His only remaining family was his daughter, Clara, and grandson, Kalimba, who were intercepted by poachers on their way to make preparations for Mr. Simum’s funeral service. Clara didn’t survive the encounter, but 5 week old Kalimba - badly injured and traumatized - is in an undisclosed rehabilitation facility under 24 hour surveillance for his protection.

Despite the wealth of life’s trials and tribulations, Mr. Simum always had a calm, collected demeanor, and enjoyed the little things in life, such as sharing stories with friends and family over a glass of fine red wine. This is how we will remember him.

We would like to thank you for coming to his funeral service, where we will celebrate the good times he shared with all of us. If you would like to make a donation to the recovery efforts of Mr. Simum’s grandson Kalimba and others like him, or if you would like to help prevent the rapid-decline of the rest of their kin, please visit www.rhinos.org to see how you can help.

At the gallery opening, our Char TD gallery got a great response! (There was much more than just this piece, featuring a wide range of things, from photography, to welded bike frames, to even custom-built action figures) I watched from a distance as what I set out to accomplish actually seemed to be working! I mean, I have no idea if anyone actually donated to the IRF as a result, but if more people are at least aware of the problem, hopefully that's a good first step.

And now for you artsy folks, here is some info on the actual digital painting itself. It was done in Adobe Photoshop CS3 (yes I'm very very out of date but hey, it works!) and printed as a digital print. It is 16x20". This is one of the few paintings I've done that actually came out close to exactly how I imagined it. Here's a closer look: 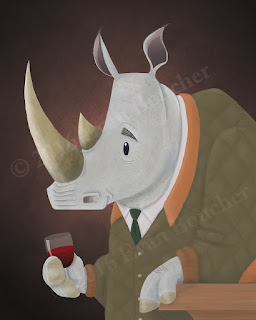 (click to enlarge)
Sorry about the watermark, I never thought I'd be one of those guys
but this piece took a lot of time and effort and I've had
my work taken and used without permission before...

And just to show some of the process, here are some rough sketches when I was trying to work out the character design: 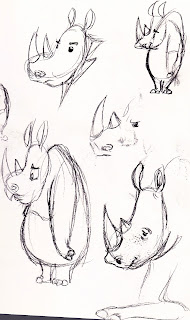 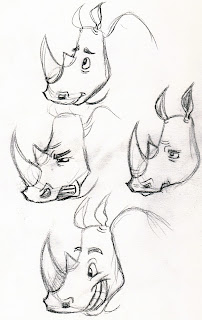 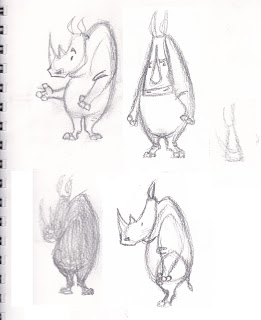 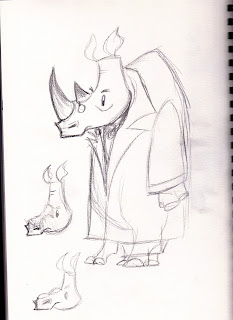 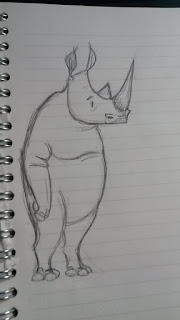 ...and a work-in-progress painting just for kicks: 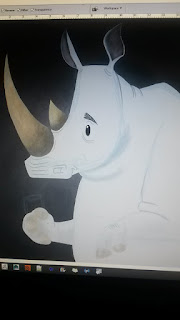 I'd like to end this post with something that came about kind of serendipitously. I was in the process of finishing this project when someone at work was asking for people to donate items for a silent auction at a charity event. The event was Bowling for Rhinos - an event happening across the country to raise money for rhinoceros conservation, which is run by the American Association of Zoo Keepers. Talk about a great fit! Since the painting was digital, when I got it printed I made sure to print a second copy to donate to the auction. I actually already had plans to attend the Los Angeles event, so this was just another incentive! 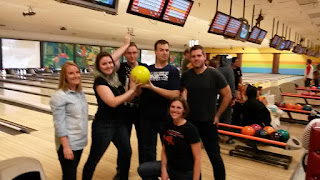 Our team: 'The Original Unicorns.'
Sorry for the blurry photo - it's the only one I have...

At the event, the painting was a huge hit! I silently watched as many people got into a bidding war over it. It ended up selling for just under $300 - 100% of which was going to rhino conservation! Considering I have never even really attempted to sell a painting before, and usually just paint things for my own enjoyment, this was hugely rewarding. I couldn't be prouder of something I made being used to benefit a cause I am immensely passionate about. 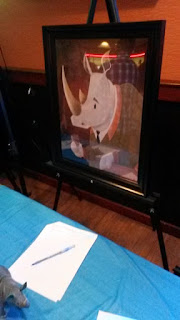 The painting at the Bowling for Rhinos silent auction

And that's where I'll leave you. This was a very rewarding experience, and I'm really glad it got such a great response. The fact that it directly supported rhino conservation is the best possible icing on the cake.

And remember to donate to the International Rhino Foundation ;)

If this post hasn't convinced you to do so yet, maybe this video I did for World Rhino Day will:

Posted by Evan Boucher at 7:07 PM No comments: