What happens while I wait for sims to complete...

I've been working on water simulation for my Thesis, and as we all know....simming takes a lot of time....so sometimes I decide to sketch while I wait for stuff to calculate. 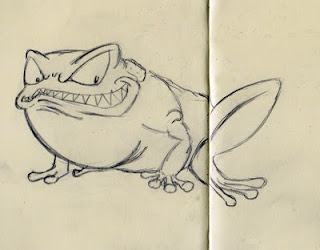 Here's a devious Cane Toad (Bufo marinus). He looks so evil, because of the nature of the animal, being introduced as an invasive species and killing everything it can. 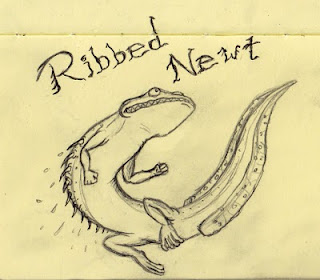 When I first read about this my mind was blown. This is the Ribbed Newt (Pleurodeles waltl). These guys are like the Wolverine of the amphibian world (Wolverine as in the X-Men Character, not Gulo gulo). When threatened, these guys actually push the pointed tips of their ribs through poison glands and then THROUGH THEIR SKIN, to stab/poison whatever it is that is attacking it. I'm not even kidding about this. you can look it up for yourself! 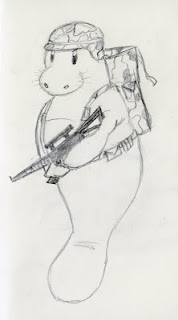 Now we have a Commando Manatee....or a Comanatee, whichever you prefer. I know he should probably be in the Navy, and not a paratrooper, but I have a special connection to paratroopers. I drew another version of this guy on a whiteboard with parachute and an 82nd Airborne Patch, but this one is simplified a bit for visual clarity. 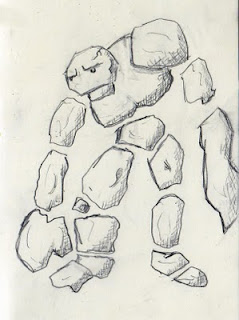 And here's a generic Rock Monster sketch I did as a quick concept for a friend of mine, who may be trying to build an army of them for a project. 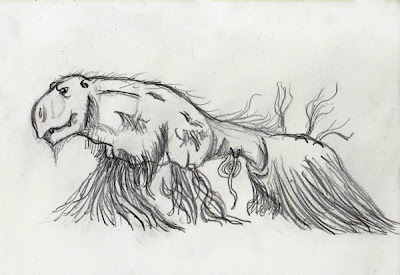 And finally, we have another experiment of mine, continuing to test myself in creating completely original creatures that don't look like anything that currently exists. The idea behind this guy is that in its evolutionary history, it lost its limbs, and instead strengthened and lengthened millions of hairlike flagelli, that sweep under and around its body. There are a large number underneath the animal to support it, while there are also these tentacle-like things all over the body that constantly touch/sense/grab onto surrounding objects to inspect, as well as to propel forward. This thing is a little creepy, and I'm curious to see how it would look in motion.
Posted by Evan Boucher at 2:02 PM